ROGER + CHRIS | Home of the unboring home.
Roger Hazard and Chris Stout-Hazard
Cart | Checkout
ABOUT ROGER + CHRIS
The big picture.
If you only read one page...
About the guys.
A little bit about Roger + Chris' backgrounds.
Timeless style.
Bringing the best of the past into the future.
Superior quality.
Built to endure and enchant.
Personal attention.
Work with the people who actually design the products — and the homes surrounding them.
Made in the U.S.A.
Why it matters to us. Why it benefits you. 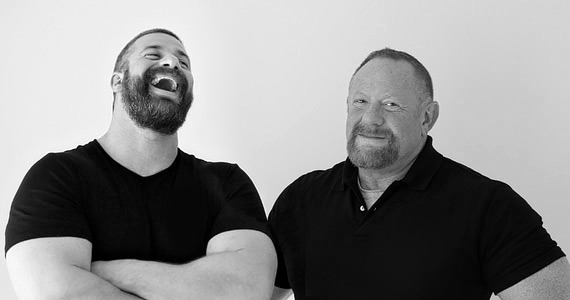 About Roger + Chris (The Humans)

Pictured above, but backwards.

Roger Hazard, a native Texan, grew up amongst Houston's oil money and colorful socialites. After attending Texas A&M University and its Corps of Cadets, he started a design and renovation business. The growth of his business led him to New York City, where he provided design services to — among others — heiresses, entertainers, and retired supermodels. (Not Naomi Campbell.)

A television producer learned about Roger's bold style, fast pace, and imposing physical presence, and proceeded to build a show around him. Soon after, "Sell This House" premiered on A&E featuring Roger. It was the first real estate-related show on U.S. television, the only staging show to be nominated for an Emmy, and continued for nine seasons and 200 episodes. Roger also starred in "Move This House" and "Sell This House: Extreme." He has been featured in newspapers and magazines including Time, Newsweek, The New York Times, The Wall Street Journal, USA TODAY, TV Guide, Entertainment Weekly, and InStyle. His work on television is viewed around the globe, and he has made television appearances on CBS, ABC, and NBC.

After living in NYC, LA, Seattle, Atlanta, and abroad — and a decade of non-stop travel for work — Roger decided to return to his native Texas to be closer to his family, good BBQ, and pleasant 110°F days.

Chris Stout-Hazard — a Nebraska transplant raised by a dental professor father and a novelist mother he describes as a "goth version of Martha Stewart" — had been a C-level technology executive in several financial companies and had relocated to Austin to become a partner in a startup business. As a web pioneer, he created technology relied upon by hundreds of thousands of users. As a designer and marketer, he established multiple young companies as national-level brands. As the author of this website, he is the one to blame for all grammatical errors.

Shortly after arriving in Austin, Roger met Chris and all hell broke loose.

They got married in Iowa in August 2011, surrounded by their families. As a newlywed couple, Roger and Chris quickly came to the realization that they wanted to reinvent themselves. Despite the continued success of his television career and the renewal of his new show, Roger decided it was time to pursue more challenging projects and walked away from TV. Chris had grown frustrated with the stodginess of the financial industry and was seeking an outlet for his creative side, so he surrendered his ownership of the financial company to his former partners. Together, they decided to start fresh with Roger + Chris — building something from scratch that showcased their talents and was — well, fun!

"That Roger and Chris: they're relatively likable, I suppose."